I have always said that before I turn 50 I want to see Italy and Greece. Instead I have managed to see Italy twice before my impending 50th birthday. We just returned from a 10 day trip in Tuscany (two nights in Florence and seven nights at an Agriturismo in San Gimignano). My husband and I both fell in love with Italy last summer during our trip to the Amalfi Coast, and knew in a future trip Tuscany would be our destination. Virtually everything about the trip was perfect, although the weather was a little hot. Most days saw the thermometer rise to 36 degrees celsius. It is not unusual to see 30 to 32 celsius on a summer day in Ottawa, but I tend to stay indoors in air conditioned comfort on those days. Italy is just too beautiful to spend your time indoors. It helped that there was no humidity like we experience in Ottawa, and that we had an air conditioned car and room, and a swimming pool in San Gimignano. Still there were days the heat slowed me down but I tried to pace myself and cool myself with gelato :-)

We started out in Florence. Florence is not a large city (certainly not anywhere near the size of Rome) so it is easily walkable, and what I love is that much of it is blocked to cars so there isn't the intense traffic of Rome. There were, however, a lot of tourists in Florence!
I was thrilled to see Michaelangelo's David. While the original is housed in the Academia Gallery (which we visited, but were not allowed to take pictures), there are two copies of David elsewhere in Florence, this one in the Palazzo Vecchio. The sculpture stands over 14 feet, and took three years for Michaelangelo to complete. 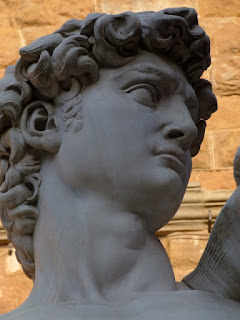 We also toured the Uffizi Gallery, which contains many other Renaissance masterpieces, such as the Birth of Venus by Boticelli.

The Duomo (Basilica di Santa Maria del Fiore) spans several blocks and dominates the skyline of Florence. I never did see the inside of it as I simply didn't have the patience to stand in a line of tourists that was several blocks long. Construction of the Duomo began in the 1200's, although it is built on the site of an earlier church. 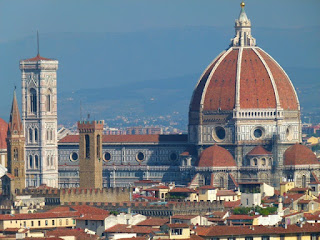 The Ponte Vecchia (Vecchia bridge) is just as beautiful in person as in the tourist brochures. This bridge has been here since Roman times although it was rebuilt in the 1300's. It is the only bridge in Florence to have survived bombing during the second world war. 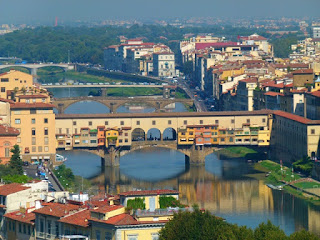 Florence is known for its leather products, and I was stunned at the number of vendors and shops selling a huge variety of leather products in all kinds of colours. The selection was overwhelming. 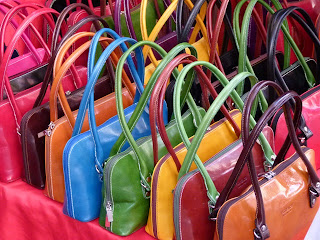 My husband gets credit for capturing this photo of a mime entertaining the crowds in one of the city squares. 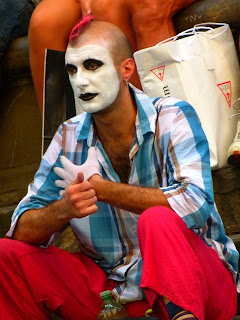 I loved the architecture of these arches that run along the Via Vecchia. 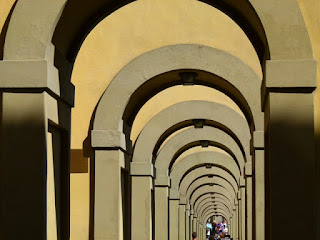 I will be blogging with many more pictures over the next couple of days. Florence was just the appetizer of this trip. In my humble opinion, the best part of Italy is the countryside and the medieval villages, which are achingly beautiful. You can also avoid the tourist crowds there.