How to Beat the Cold: Yellowknife, Part 1

I arrived in Yellowknife, Northwest Territories yesterday afternoon, flying Ottawa-Edmonton, then Edmonton-Yellowknife. I am happy to report that all my luggage arrived with me! Tonight I'm giving a lecture/presentation to the Yellowknife Quilters Guild, who have hired me to teach four workshops as well in the next week.

I am staying in a lovely private apartment in the same building as Donna MacDonald, the guild's Workshop Coordinator. I enjoyed dinner out with Donna and her husband Ray last night. I have a view of the frozen-over Great Slave Lake from my living room window. Here's the living room and the window: 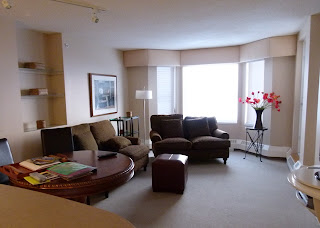 When I woke at 9:30 this morning the sun was just coming up, and below is the sight that greeted me. There is an ice road across the lake in winter that leads to the First Nations community of Dettah. In summer everyone has to drive around the lake. 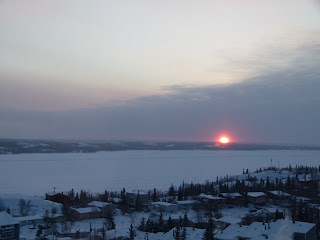 I am staying only a few blocks from downtown, and today decided to venture there. It is actually quite warm today (by Yellowknife standards) at -18 censius. Have you ever heard car tires whine on the snow like they are driving on styrafoam? That is the sound I heard walking downtown. I noticed immediately that there is no ice or snow on the sidewalks! It seems the sidewalks in Ontario are always icy due to freezing rain or thaws that freeze suddenly. In Yellowknife things freeze over in November and there are no thaws during the winter.

As I walked downtown a number of people greeted me in a friendly manner, some even asked what I was taking pictures of. One woman took a picture of me. 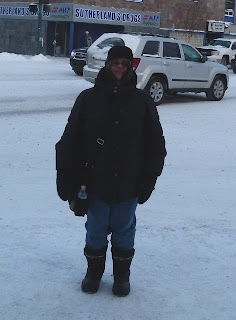 I have quickly learned that the way to master cold temperatures is to dress for them. I made a trip to Marks Work Warehouse before my departure and found a warm hat and mitts (not gloves). And forget about vanity ... hat hair is the norm here!

Yellowknife is popular with Japanese tourists, and they were well-represented on the small plane from Edmonton. They come here to view the aurora borealis (northern lights), as Yellowknife is one of the top locations for northern lights in the world. Word on the street is that there will be a solar storm tonight and the aurora will be in top form. I am heading out on a late night tour after my lecture. Hopefully there won't be too much cloud cover as that might obscure the aurora.

The City of Yellowknife also has several businesses catering to Japanese tourists: 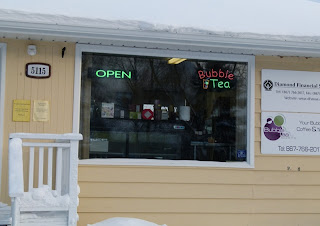 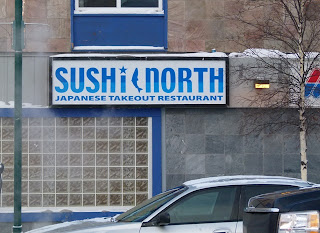 I stopped at the highly-rated (on TripAdvisor.com) Javaroma coffee house. It was teeming with activity, and I had one of the best cappucino's I've had anywhere since Italy last summer. 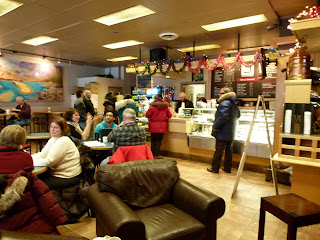 I decided on lunch at the Saigon Noodle House. A great choice! 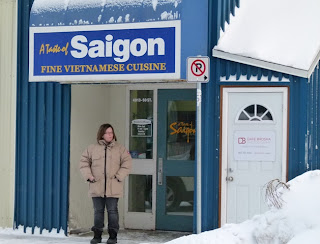 Here is a view of the main street of Yellowknife: 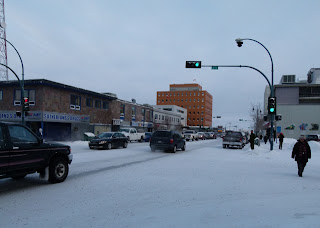 There is still evidence of its early gold mining days: 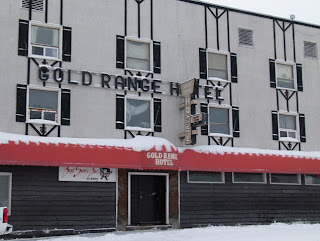 Today Yellowknife is a government town, a popular tourist attraction, and recently experienced a boom due to a new diamond mine north of the City.

Stay tuned for photos of the aurora (I hope) and photos of my teaching week.
Posted by Elaine Quehl at 3:02 PM