I arrived in Halifax on Sunday night for a couple of days of R&R before I teach at the Mayflower Quilters Retreat in Pictou. Although I was supposed to fly directly from Ottawa to Halifax, WestJet cancelled my direct flight and shipped me Ottawa-Toronto-Halifax. How much sense does it make to fly an hour west in order to fly two hours east?

I spent the last two nights at the Atlantica Hotel and Marina, which I got for a steal during this off-season period. It is a lovely resort with views of the ocean from the dining room, sitting rooms, exercise room, indoor pool, hot tub, as well as many of the guest rooms. 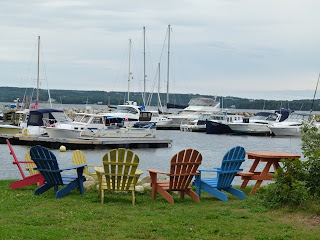 Weather in Nova Scotia is often at its best in September, but as I watched the Weather Channel prior to my trip I swear I saw them add a day of rain each time I looked. Given that the reports change daily, I thought, surely they will have to start removing some of the rain symbols once the week is full of them!! Locals claim that these weather reports often bear no resemblance to what is actually happening here. In any case, today was a beautiful day, while yesterday was cloudy with a few showers late in the day.

Today I drove down to Lunenburg to visit with one of Canada's most successful and well-known quilt artists, Laurie Swim. Laurie is a graduate of the Nova Scotia College of Art & Design (NSCAD), and has worked in the quilt medium for the last 40 years. I would say that makes her a pioneer in the art quilt movement. I have long admired her and her work, and I really wanted to talk to someone and ask questions of someone who is well ahead of me on this career path. I will never forget the first time I saw a show of Laurie's work at the Waterloo Quilt Festival in 2003. I would say that she has been influential in inspiring me down the art quilt path.

Laurie maintains a gallery on Lincoln St. in historic Lunenberg, where she sells her original art quilts, books, prints and cards. Her husband, Larry Goldstein, manages the gallery and looks after the publishing end of her business. 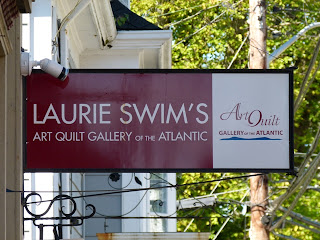 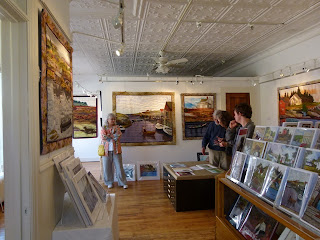 When I arrived at the gallery, Larry showed me to Laurie's studio, which is just above the gallery. I found Laurie at her sewing machine working on her latest piece. 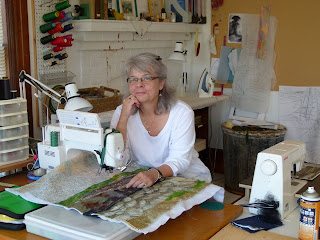 After a viewing of her studio, we walked up the street to have lunch, and then returned to her studio and gallery. At the end of my visit Laurie took me to her apartment next door, where I was thrilled to find "At the End of the Day" hanging in her living room. It remains one of my favorite pieces. 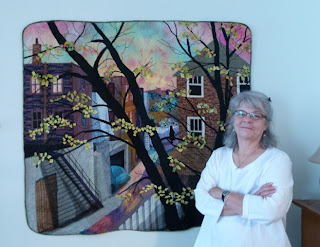 Laurie was a gracious and sharing hostess and I have much food for thought as I move ahead with my art quilt career.

I drove to Pictou later today and will begin retreat activities tomorrow, with workshops to follow on the following three days. I will blog soon!
Posted by Elaine Quehl at 5:53 PM