I've been on the road so much that I have not been blogging much about what I've been doing locally. Since September, I've been teaching my "Art Quilt Series" of workshops once a month at Dragonfly Fabrics here in Ottawa. The series runs until February. The class has 8 students, which makes it a bit more personal than when I ran it at a local community centre. It is also the same class I've been teaching in a one-week format at the Haliburton School of the Arts the past two years.

Today was Session 3, and the topic was fabric dyeing. Students were introduced to two types of low-water immersion dyeing. One exercise involved learning about colour mixing by dyeing a 12 step colourwheel using three parent dye colours. The second exercise involved learning my very free method of dyeing multi-coloured fabrics. Students who had already taken a dyeing class with me got to work on another dyeing project of interest to them. 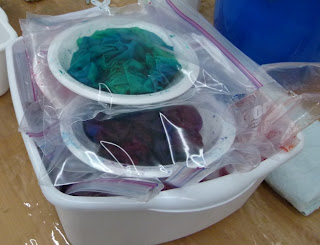 Some students also brought their completed design exercises from the last class, when they were introduced to two methods of designing. The first method is a fly by the seat of your pants method that involves cutting free-hand and responding to the design as it develops. There may or may not be a photo used as inspiration. Students are required to select a composition (i.e. horizontal, vertical, diagonal, radiating, etc.) that will enhance their idea and to have one of the elements and principles of design dominate.

In this first work Josée used seat of the pants design, with the aim of evoking a feeling of impatience, and in that light she named the piece "Waiting". The vertical composition is certainly appropriate for this since it commands a feeling of strength and dominance. I almost feel like hurrying up because I'm afraid this guy is going to lose his cool! The choice of warm colours to depict impatience is also a good one ... cool colours would have conveyed calm. 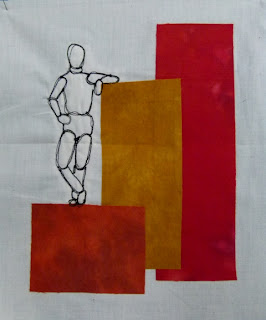 Lynn, who describes herself as usually meticulous, said she let herself go with this design and we all described it as her satchel of creativity. Very appropriately, she chose to create a piece in an irregular shape for this. 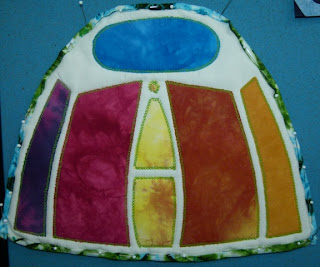 The second design exercise involves creating a pattern to work from. Students are required to work with a range of 5-7 values of the same colour for this one, and are once again asked to choose a composition to enhance their idea.

Josée created this abstract design in a value gradation of blues. We looked at it in four different orientations and agreed that, from a design point of view, it worked in all four! When seen vertically, some saw an embryo, horizontally some saw water. The curved lines running in an almost diagonal direction give the piece a wonderful feeling of movement.

This is the design Jeannie came up with for the second exercise. She chose to do an iris in a value gradation of purples. We all loved the focal point in the upper left corner, which drew our eye into the piece before moving around the flower. Jeannie brought the piece to class with a heavy dark border pinned to it. 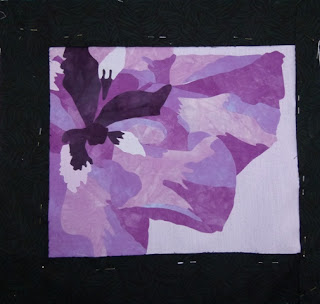 I suggested she consider not using a border, and once she had removed it, most of us agreed that the piece was now able to breathe. The border was too harsh and really boxed the design in. 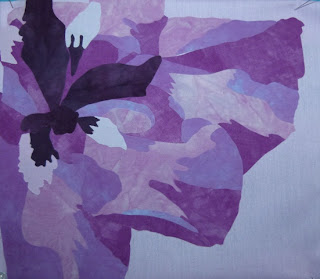 I am not a big fan of sewing borders on an art quilt once it is finished. All too often I think they are added as the logical next step because that is what we do with bed quilts. I probably wouldn't bind this work either, but instead face it, and perhaps mount or frame it. Small works like this have more presence when appropriately presented. All this reminds me that I should dig up the article I wrote called "To Border or Not to Border: It's All About the Design" for the Fall 2009 SAQA Journal. I will want to post a link on the side of the blog where it is easily accessed, but first I have to figure out how to do that.
Posted by Elaine Quehl at 9:52 PM