No, I'm not heading to Houston, but I've just learned that two of my quilts were accepted to the World of Beauty juried international show in Houston.  They are as follows: 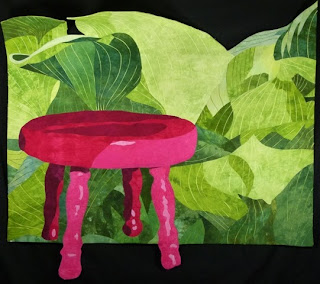 I don't anticipate being in Houston myself this fall. Too many competing demands on my budget! I haven't entered Houston in a few years, and discovered that my hanging sleeves are not up to their standards, so that is going to take some work to fix. I've also been asked to ship Curtain Call 2 early as it has been chosen for POSSIBLE inclusion in the Quilt Scene Magazine, a magazine by Interweave that covers events at the Festival. To save money on shipping (which is very expensive) I have permission to ship both quilts together, BUT Red Stool, being an irregular-shaped quilt, needs to be mounted on black fabric, and that black fabric needs to include a hanging sleeve.  There's a major not-fun project I need to fit in this week. I sure hope it hangs OK when its mounted. They'll have to be shipped this week as I'm away the next two, and they are due by August 1.

I know I've been quiet lately, but I am madly preparing for my two weeks of teaching at the Haliburton School of the Arts, beginning next week. First week will be my Art Quilt class, and the second week is a new class called Flowers and Foliage.

I've also been on a dyeing binge, partly inspired by work I want to complete, and partly inspired by an offer that has just come in from a fabric company to collaborate on a line of fabric based on my hand-dyes. I will share more about this when details are finalized. It took me a while to come to a decision on whether to take this on. It is going to involve publishing some patterns too.  Stay tuned!

Email ThisBlogThis!Share to TwitterShare to FacebookShare to Pinterest
Labels: Flowers and Foliage, Haliburton School of the Arts, Houston, Shows, The Art Quilt Series