A Weekend in Timmins, Ontario

Friday I flew to Timmins, Ontario to lecture at the Timmins Quilt Guild's show, and give a workshop the following day. As the plane began to descend outside the city I noticed there was still a little snow left in the bush. By the time I flew out on Sunday night, it had all melted. It was a warm weekend indeed! 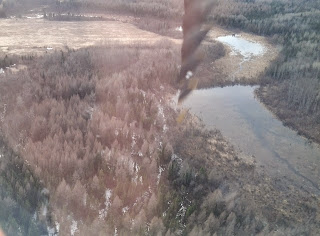 The guild's show was attended by many guests from guilds in neighbouring communities. There was a contest for the best block in the theme of "spring flowers". Yours truly was asked to choose her favorite block from among 63 blocks! 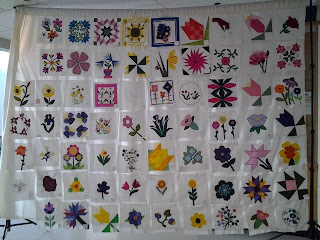 It took a lot of deliberation on my part, but I kept coming back to this block. To me it stood out from the others. While most of the other blocks featured purple and yellow (very popular colours in spring flowers), and/or pink, this block had unusual colouring and a very appealing crisp graphic quality. Yes this was the winner I chose! 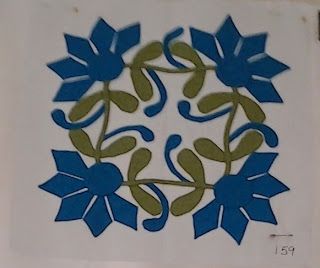 This block vied with the one above for a little while. I'm sure it had something to do with the value contrasts, something that always appeals to me. It was my second choice, but I like them both. 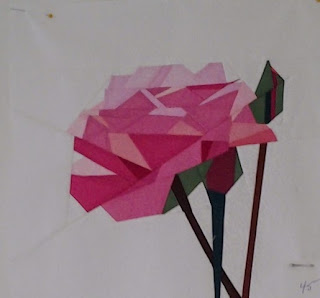 Everyone had lunch at the show, which featured this charming cupcake tree. Every cupcake was decorated with edible spools of thread, threaded needles, tape measures and other icing decorations related to sewing. It was quite special, and yummy too! 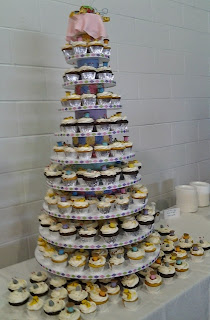 You can see a little bit more detail here. I was trying to travel light so relied entirely on photos from my cell phone. These photos are not as clear as my usual camera. 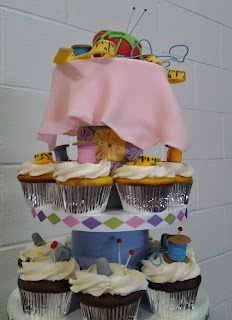 I was the featured afternoon guest speaker. There were about 165 people in the audience from Timmins and neighbouring communities. At the end of my talk I was presented with this gift of a hand-made tote bag by Joan, the Chair of the Quilt Show Committee. I met Joan last year at Quilt Canada in my dyeing class. She spent days creating this lovely bag using my Falling Leaves fabric line. It features multiple pockets, zippers, and compartments and a lot of machine embroidery (including spirals!). Thank you Joan for such a thoughtful gift. 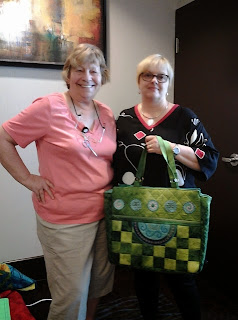 I've included two photos so you can see both sides of the bag. 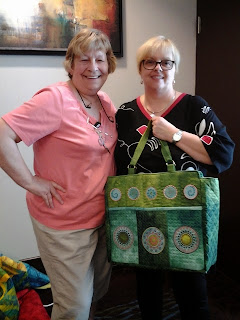 Sunday I taught a workshop in the conference room of the Holiday Inn, where I was staying. A group of about 15 women took the class. 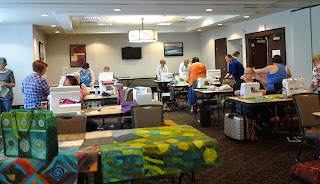 They spent the day sewing free-hand curved blocks. There was a lot of my Falling Leaves fabric line being used :-)  Christina, the owner of Needleworks Studio in Cochrane, Ontario attended the workshop and brought a supply of my fabric with her. 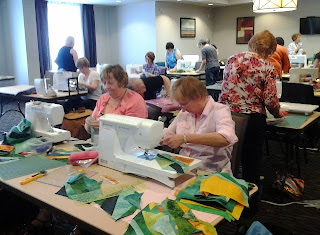 These are Suzanne's blocks 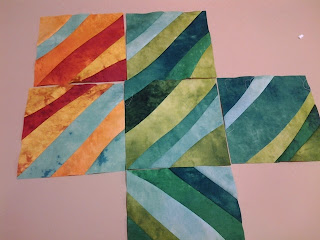 Lori organized the workshop and looked after all our needs that day. 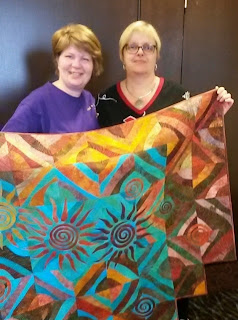 A huge thank you to a warm and welcoming group of quilters!!