Slain by the Word?

When you step outside at this time of year, particularly at night, you can't help but notice the scented air.  I notice this every night while letting my cats out and back in.  Lilacs, and all kinds of other fragrant blooms, are in season.  The words "Come to the window, sweet is the night air" keep going through my mind.  It is a line from an old poem called "Dover Beach" by Matthew Arnold.  Many other lines in this poem "slayed" me when I was only a young woman in high school.

What do I mean by "slayed"?  I mean "hit me in the gut" and captured so much that resonated with me.  As a teenager I read and wrote a lot of poetry.  The stuff I wrote was mostly just the navel-gazing drivel of a painfully shy and geeky teenage girl expressing her angst.  I even dreamed of being a writer, but instead I became a secretary as it was more practical.  I entered and graduated from university as a mature student.

Do you have a favorite line of poetry that hits you like a ton of bricks?  Have you ever had these words inspire a quilt?

Here's a piece of mine, made in 2006, that was inspired by the words "heartbeat of the earth", which came to me from an aboriginal radio station.  Hit me in the gut actually.  So I started sketching, and a quilt called "Heartbeat of the Earth was born: 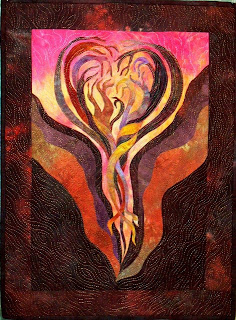 Heartbeat of the Earth, 2006
There have been other times when a piece has been named with a title or snippet of poetry.  An example is "Vagabond Song" below.  The name is from Bliss Carman's poem A Vagabond Song, which has also been one of my favorites since high school.  It starts with the line, "There is something in the autumn that is native to my blood."  I knew one day I had to make a quilt that expressed this poem, and one day while photographing in Vermont I was stopped in my tracks (literally "slayed") by the most amazing and gnarled red-leafed tree.  It inspired my quilt, which was already named before it was made. 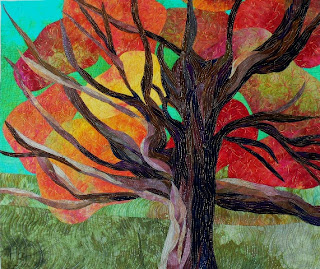 In some cases, a title or snippet of poetry is chosen after the quilt is made.  An example of this is "Kissing Joy" below.  Poppies are so brief and ephemeral that coming upon one is literally like "kissing joy", as described in William Blake's very short poem Eternity:
He who binds to himself a joy
Does the winged life destroy;
But he who kisses the joy as it flies
Lives in eternity's sun rise. 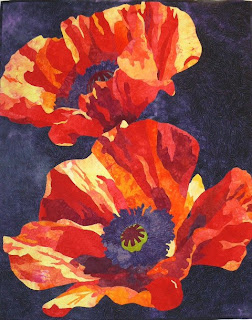 What brings this topic to mind today?  Well it just so happens that a few days ago I read an article in the Globe and Mail about the serious and funny aspects of travelling with cats.  The writer quoted a line from Farley Mowat's book "The Dog That Wouldn't Be", describing Farley's feelings after the dog's death.
The pact of timelessness between the two of us was ended,
and I went from him into the darkening tunnel of the years.

Are the words "pact of timelessness" not brilliant?  Hit me like a ton of bricks!  Slayed me in fact.  Will it inspire a quilt?  We shall see ...


Speaking of words slaying us, but not necessarily in a good way, a few weeks ago I had a student in my free-motion machine quilting class that claims she was told by another teacher that she is hopeless at free-motion.  Guess what?  Her free-motion machine quilting looks just like mine did when I began!  I would say there is lots of hope for her.  So we also need to remember how easy we can slay others and their creative spirits with our words.