What's Wrong with this Picture?

The theme of today's post is "what is wrong with this picture"? I will begin with photos of my studio, as it appeared after coming home from my two weeks of teaching at the Haliburton School of the arts. This is AFTER I put all my things away. Can you see why it felt impossible to work in this space? 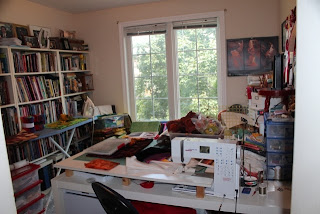 Stuff was piled everywhere! Even the palettes of fabric I might need for my next projects kept getting stacked higher and higher on a chair. 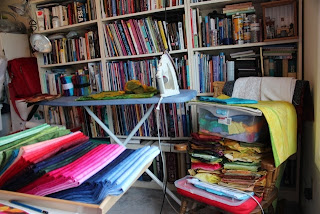 I couldn't even find the table tops! 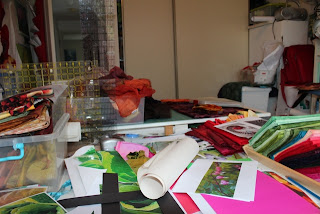 Bits and pieces of projects were all over the place. 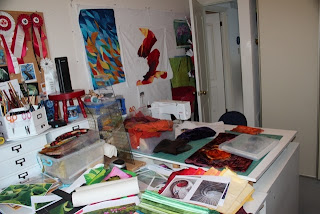 But now it is fixed!  See my closet on the far wall (this is with doors off)? Two new shelving units that fit properly and are heavy duty enough to hold all those bins of fabric were part of the solution. I was able to fit more into the closet than before the improved shelving units. One unfortunate fact is that I still have way too much commercial fabric taking up my precious space, meaning that most of my hand-dyed fabrics are stashed in a big white pantry (to the right) and a chest of drawers in the neighbouring room. Yes, I do use my commercial fabrics for backings and such, but at the rate I'm producing (or not producing!) work I have way too much fabric. Hmmm ... didn't I mention this problem about 2 years ago? The good news is that I now have an intimate knowledge of where my in-progress projects are and I have clear table tops to work on! 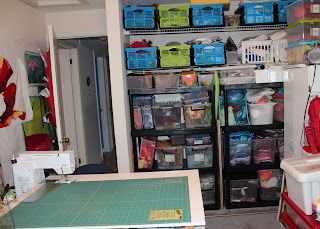 And on the theme of "what is wrong with this picture", I present the following. While I still love the tulip in "Queen of the Night", made in 2008, I am bothered by the stagnant composition. It sits centre stage with all that dead space around it, and it is far too symmetrical. While I knew better at the time, I was single-mindedly focusing on studying value to the detriment of other aspects of good design. 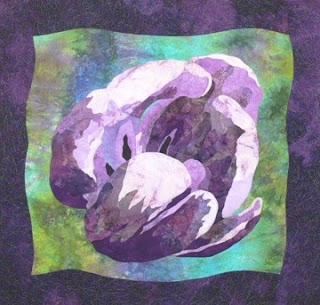 So I tried cropping the photo to make the borders less symmetrical. 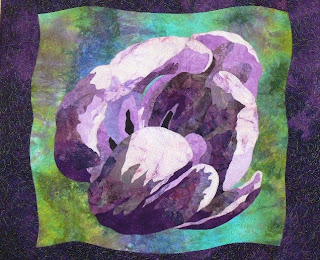 I tried colouring in two possible positions that I might add a stem, that would draw my eye up into the tulip. 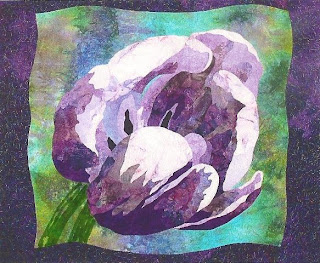 I tried cropping all borders so they would be less overwhelming and "quilty". I want this to look like art, not a bed quilt. 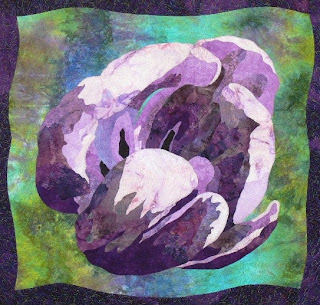 Finally, I tried cropping all borders away, as well as cropping some of the dead space to bring the flower up closer. This looks more modern and arty, I think. I could crop even closer if I wanted to and make the work even less symmetrical.This will mean that a quilt that was once 40" x 38" will be reduced to 28" x 24". But I'll feel better about it. By the way, these crops have been made digitally to the photo, not to the actual quilt. YET 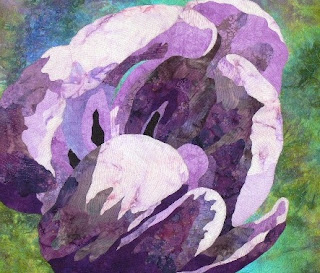 Feel free to weigh in with feedback on the composition.

Right now I'm revisiting all the patterns I teach for improved composition. I am AOK with all the trees, but have a few florals to improve, which may be included in the patterns that get published and distributed. Up until now I have only sold patterns in conjunction with instruction. By the way, I should also announce that there will be a hosta pattern/s and a hosta class. The time has come!! I hope it/they will be available early in 2014.