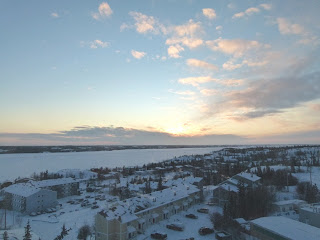 I woke to a crisp bright day here in Yellowknife, with temperatures at -29 celsius. This is a good thing as it was unseasonably warm here (-10 yesterday), making for snow and overcast skies. This has meant the cancellation of my aurora tour on Tuesday night, and a tour that produced no aurora last night. I am heading out again tonight between 11 pm and 2 am.

During last night's aurora tour we drove three hours in the wilderness outside Yellowknife. It was snowing and cloudy, but our native guide Joe, who is a Dene Indian, thought the snow and clouds were moving in a certain direction and would clear, but they didnt. We had seven people on the tour last night, including an amazing Chinese family from Toronto .. the wife/mother has been to many locations chasing the aurora (Whitehorse, Yukon and Finland). They brought the whole family this time and although they did see aurora on Sunday and Monday nights, the aurora eluded all of us last night due to cloud cover. You may have heard on the news about the solar storms taking place right now, which would normally make for a stellar aurora experience, but first we have to clear the clouds

Even though we saw no aurora last night, I had quite an education ... what a wild and harsh country this is. I saw the ice roads that the truckers use to get up to the mines. I learned there are 2000 lb buffalos in the Northwest Territories. Who knew? When we came to one of the vantage points on the route we would all get out of the truck and look around, and Joe would have to take a flashlight to check there are no packs of wolves waiting to prey on us! I also heard stories of the many people who have died when the ice gave way while driving on it (no I am NOT going on any ice roads or lakes!). Apparently you can hear it cracking sometimes when you drive on it, even though it is several feet thick. The wildness outside the city is mind boggling!

One thing is clear to me, I (and many Canadians) are and have been completely unaware and ignorant of the North. I have a feeling I will be coming back here again!

Since I didn't make it back from aurora watching until 2 a.m., I missed the dog sledding tour I was to go on today. Oh well. This evening I'm teaching the first half of my "Reflections" class.

On Tuesday evening I delivered my "From Inspiration to Art Quilt" lecture at the Yellowknife Quilters Guild meeting. I met many women who had moved here from all over Canada and love it here! 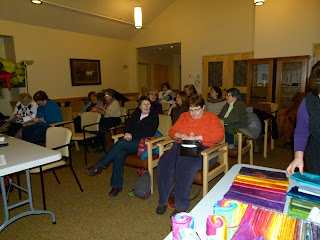 Since I was flying within Canada I was able to bring a small selection of my hand-dyed fabrics, which were well received. This is Donna MacDonald, the guild's Workshop Coordinator, who handled my sales while I talked to members about my quilts. I took about a dozen quilts with me. 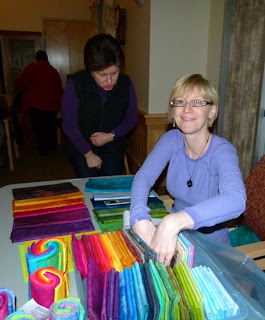 Yesterday I walked around old town wearing nothing but sneakers and wool socs on my feet. At -10 the warm boots I brought with me would have been way too hot. I made a visit to the Gallery of the Midnight Sun. It sells hand-made arts and crafts from Northern Canada. 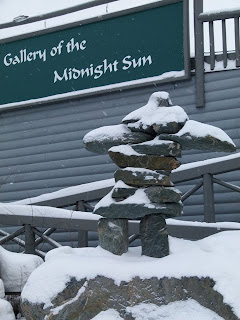 Then I had a late lunch at the famous Bullocks Bistro. 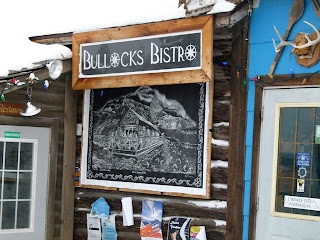 Known for its rustic appearance, irascible owner (Jane Sassaman had described him as the "fish Nazi" when I met her in Nova Scotia in September, as did many on-line reviews), and very fresh seafood. In fact, I found the owner friendly and helpful. I had the whitefish and it was lovely. When you get there the cook will tell you what fish and game are available that day. It is a strange mix of rustic and gourmet with home-made salad dressings in fancy bottles and a cappucino machine. 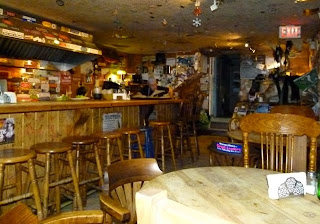 In the evening I taught my thread dyeing class. The guild here has access to a wonderful studio space used by the local mixed media group. Everyone seemed to enjoy dyeing thread. 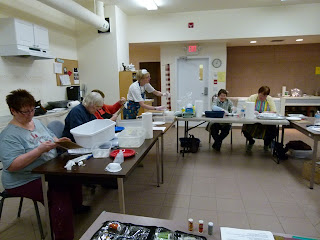 I know readers love seeing eye candy, so here are some of my own spools of hand-dyed thread. 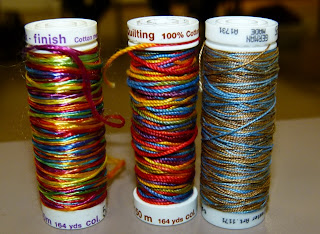 I did a demo of couching, bobbin drawing, and hand stitching with the hand-dyed threads. Facinating people here: one of the ladies in my class has flown here from Inuvik for the week.

Stay tuned for "Yellowknife, Part 3". I hope to have some aurora photos!
Posted by Elaine Quehl at 2:08 PM