A few years ago I started dyeing silk/rayon velvet, silk dupioni, silk organza and cheesecloth, in addition to cotton lawn. I sell these fabrics in my Textile Temptation packs. While I have found using the velvet very easy and straightforward, despite the fact that it is slinky and stretchy, I am finding the organza a little more challenging. Why? Well because I want to make use of the organza's main feature: its transparency!

With the velvet, I simply draw my design on the paper side of a piece of fusible web (normally Steam a Seam Lite), cut it out roughly, iron it to the back of my piece of velvet, then cut the design out on the line. To adhere the velvet to my quilt, I pull the backing paper off, position the velvet on the quilt and hold a hot hot hot steam iron over it, very close, but not touching (you don't want to disturb the pile). This is enough heat to melt the fusible and affix the velvet to the quilt, and of course I typically free-motion quilt very densely.

Here are some samples of quilts I have used velvet on.

In Branching Out, I applied fusible web to the back of velvet and cut out my collage shapes just like I did with the cottons in it. The velvet adds a little more texture to the trunk. 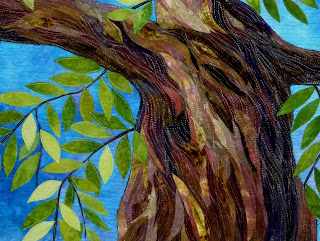 In Forgiveness, (a white magnolia), I used velvet in the centre of the flower. In hindsight I wish I had used one darker in value or with more value variation in it. 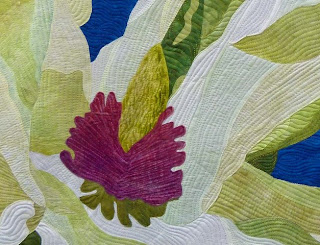 Around the centre of this white poppy, I used a dark purple velvet, a mottled velvet in the tentacle-like structures that reach across the middle, a purple silk organza beneath, and a bit of green duprioni silk. 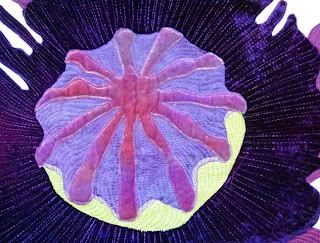 Here is the full view of the white poppy. The purple areas bleeding out of the centre are silk dupioni. My goodness it was a pleasure to stitch through, I could see the relief forming, and I vowed I would stitch on more dupioni in future. 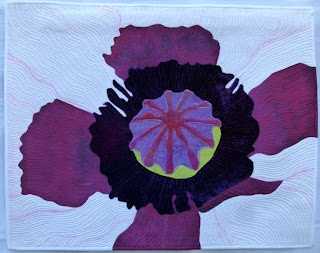 In Seduction 1, I used velvet in the five round shapes surrounding the upper part of the stamen. The velvet provided the lovely texture that was present in the Hibiscus flower that was the inspiration for this piece. 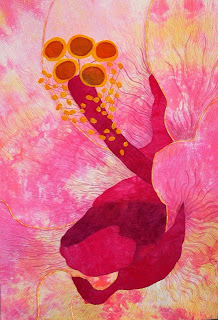 I must share the comment I received about this piece in my guest book at my show at the Shenkman Arts Centre last year. A man wrote that I had a "very good understanding of the male orgasm"! Sometimes what people see in our art says more about them than it does about us! On the other hand, sometimes we don't always understand why we express ourselves the way we do and what it means.

The challenge I have with silk organza is that it is transparent in addition to being slinky. Most fusible webs are a little too opaque for my taste. I did try a small sample of an end-of-season hosta leaf using Misty Fuse, and it was not very successful, mostly because I am not adept at working with a fusible that does not have a backing paper.

1. Misty Fuse
I used white Misty Fuse, and it is definitely the winner in terms of transparency. The problem? I hate working with Misty Fuse because there is no backing paper. 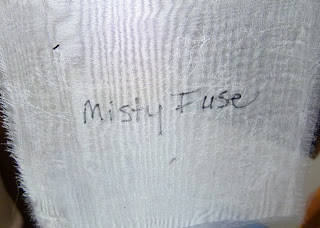 2. Shades Soft Fuse
This product is easy to use because it has a backing paper, and among the fusibles that have a backing paper, it is the most transparent. The down side is that it can only be purchased in the U.S. (as far as I know) and it is quite expensive. A SAQA colleague of mine, Philippa Lack, sent me a small sample. She loves it on silk and I can see why. 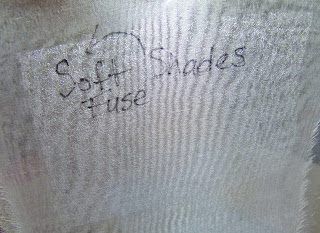 3. Trans Web
My third choice in terms of transparency is Trans Web. I've seen it in Canada but not very often, but just discovered that amazon.ca sells it! Given how inexpensive it is (when you can find it), and given that the transparency is only very slightly behind Shades Soft Fuse (above), and that it has a backing paper, I think I would probably go with this product if I decide that I want to fuse my organzas. 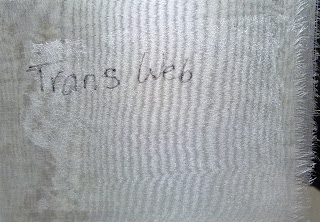 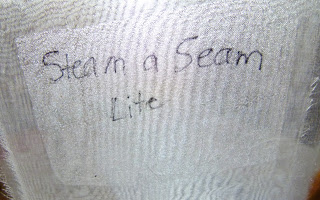 I am still thinking that to make use of organza's sheer quality, it might be best to not use a fusible. So I tried something else. I used four colours of organza, in order from top to bottom, brown, terra cotta, grass green and golden yellow. I pinned the four layers well, and then on my sewing machine I stitched vertical and diagonal lines through all four layers. After I was finished I cut away the layers I needed to to showcase the colour of organza I wanted visible. Sometimes it involved cutting from the front and sometimes from the back. For example, the green was third from the top and second from the bottom, and when I had cut away the top two layers the green looked too yellow with the layer of yellow beneath it. So I had to also cut the layer of yellow away from behind it. This process will require a lot of planning and very very careful cutting away to reveal the desired layers. Even on this small sample I've already accidentally snipped into the wrong layer twice!! 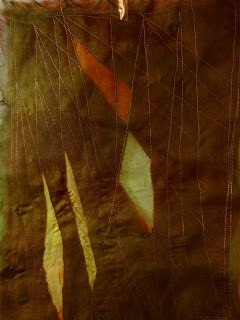 One more thought I have is to trace my design on freezer paper, iron the freezer paper to the organza to tame it, and then cut out shapes. That still leaves the problem of how to stitch down the organza without it slipping and sliding away. Fusible would tame it, but fusible isn't as sheer as I might like.

Those are my experiments so far. I will keep you posted if I have any other ideas, and would love to hear yours.
Posted by Elaine Quehl at 9:01 PM