Wednesday I made the 7 hour trip to London, Ontario to attend Quilt Canada. I was feeling a little disequilibriated (is there such a word?) when I left, but 7 hours alone in my car with great music did wonders for my equilibrium. Wednesday night began with the Opening/Awards ceremony. I had a blind date to attend with my on-line friend Jackie White. Jackie lives on Manitoulin Island, Ontario, and is the comedian of the Canadian Quilters Association. You will know her from the humourous article she contributes to each issue of the Canadian Quilter Magazine. She also accomplished the amazing feat of having four entries juried into the National Juried Show! 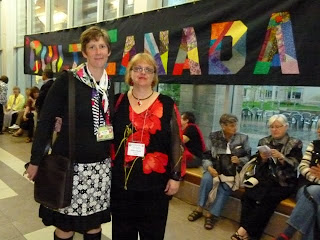 On Thursday I was up at the crack of dawn to teach my Flip and Sew Curves class. Here is a photo of most of my class near the end of the day, along with the works they created up to that point. Students came from all across Canada. 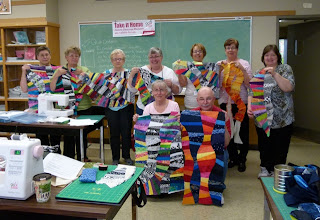 Friday was my day to see the shows. That included the Invitational show, the National Juried Show, and the show of FAN (Fibre Art Network of Western Canada). Unfortunately I have few pictures because this is one juried quilt show where photographs are not allowed. The only two photographs I was allowed to take in the juried show were of my own works and they were taken under the supervision of a show volunteer. I was pleased to find Sun Temple hanging immediately inside the front door: 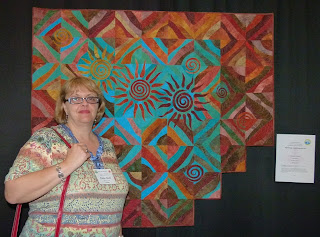 Here I am with "Forgiveness". 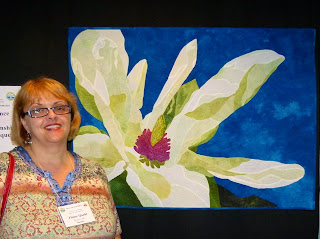 I would have loved to include photographs of two of my favorite pieces here. The first is called "Morning Meditation" by Carol Goossens of New York City. I have tried to find a website or blog but she doesn't appear to have one so I haven't been able to contact her to share a photo. Carol won a ribbon for Best Representational Quilt. My favorite quilts in any show are usually not the same ones chosen by the judges, but this is one case where I think the judges got it right. One of my other favorites was "Seasons Song" by A. Joyce MrcKinnon of Thunder Bay. She has been exhibiting in Canada for many years and I am a great fan of her work but alas she does not have an on-line presence either. I did manage to capture a photo of Vivian Kapusta's piece at the FAN show and got her permission to include it here. 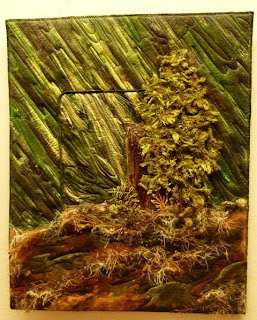 I really loved the texture on this piece and the directional background. I felt like I was walking into the world of Emily Carr.
I headed over to the merchant mall to check out the wares, and managed to capture a photo with Anita Zobens of Cotton Mill Threadworks. I've met up with Anita at several shows I've taught at now, and she asked me some time ago if she could borrow some quilts that had been quilted with Superior Threads. No problem! I happen to love Superior Threads. Here we are with my quilt "Luscious". 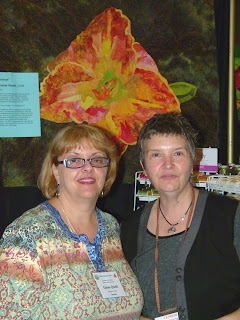 Friday night I was back on duty for "Meet the Teacher Night". It was well attended by folks from all over Canada and hopefully this will lead to one or two teaching bookings.

After leaving Quilt Canada on Saturday I headed up to Ailsa Craig to attend the Quilts of the Netherlands show. I had been hearing glowing reviews of this show and they were right. I was pleased to find a good number of art quilts displayed, and really enjoyed the different aesthetic from that found in North American quilts.
From there I headed to the Grand National Quilt Show in Kitchener. I had two works in this show. I think my favorite piece was the grand prize winner, "Aglow" by Anna Hergert. At this juried show photographs are allowed. I am always blown away by Anna's work in person. She uses sheers very effectively and their full effectiveness has to be seen in person! 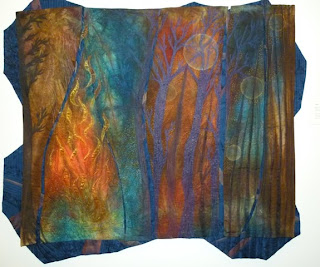