Last night I returned from my two week teaching trip. I spent the second week teaching in Norfolk County, Ontario for the Norfolk Quilt Guild and the Norfolk Twilight Quilt Guild (the former meets during the day and the latter meets at night). The largest community in the region would be would be Simcoe. One of the things I love about this area of Ontario is that I can pass through Paris, Delhi, Scotland and Boston in the same day! During my trip I was billetted in three different homes over the week.

I began the week with a lecture and two workshops for the day guild. During this time I stayed at the home of Terry Anderson and her husband Rick. We went out for dinner a few times, including a visit to the Beach House at Port Dover, where we indulged in famous Lake Erie Perch. When I arrived at Port Dover I felt as though I was in the Caribbean! Palm trees grace the shore over the summer, but they are moved someplace warmer over the winter. However, Norfolk County is in a Carolinian growing zone, so I also noticed quite a few other crops and plants that I don't see in other parts of Ontario (tobacco, ginseng, peaches, etc).

Left to right are Terry, Darlene, Mary and me! 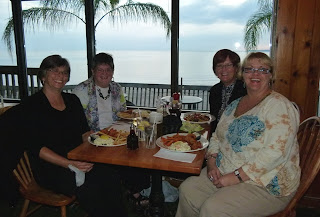 Because this guild chose workshops that produce larger and more time-consuming pieces I don't have photos of any finished pieces yet.

I spent the next four days with the evening guild (four workshops and a lecture). The Twilight Guild organized a day retreat and named it the QUINCE Jam Retreat (Quehl in Norfolk County Extravaganza). What, you may ask, is a Quince? Apparently it is a coarse and bitter apple. On-line encyclopedia Wikipedia doesn't recognize it as growing in Canada, but it does! Generally it is used for jam. I had never seen one before, but student Mary Ann Rich brought one to class for me, and it sat on my table as our mascot each day. 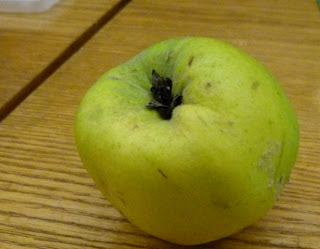 For the first two nights I stayed with April Maxwell and her husband Paul. Below is a photo of April holding the piece she composed in my "Fast and Fun Fused Designs" class. April is a potter and President of the local Potter's Guild. I wish I had taken a photo of her pottery studio and display area. I did come home with a few pieces of pottery though! 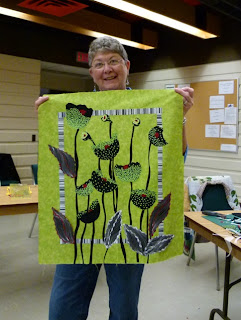 April and Paul share their home with two very large and beautiful cats, Marty and Duff. What an adorable pair of felines they are! I am not a small woman, but you can see I am pawsitively dwarfed by Marty! What a lovable bundle he is. I couldn't decide between the photo with his eyes open or closed! 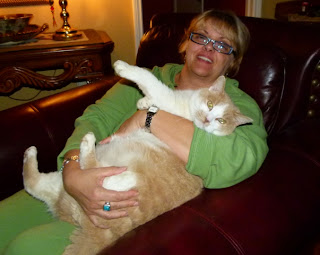 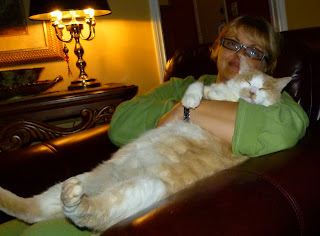 This is Duff. He wasn't so sure about me, but he did show up to cuddle in my bed for about 5 minutes the first night. 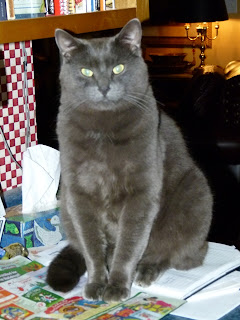 I spent the last two nights at the home of Terry Sonnenberg and her husband John. They share their home with felines Atticus, Caruso and Macy. A feral cat named Cato also shows up outside for meals. That's Terry you see working away near the front of the classroom. 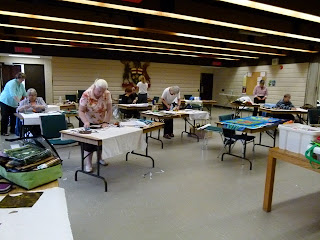 Atticus followed me to my room my first night there, and made himself comfortable in my bed as soon as I turned the blankets down. He purred, rested his head on my arm, and stretched his paws to touch me. He left the next morning without waking me. By the second night I was yesterday's news and he didn't come back. 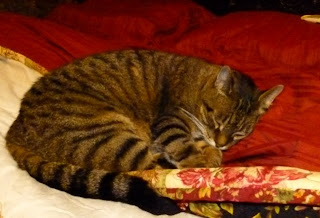 The cats at Terry's house have a beautiful conservatory in the woods to enjoy. It is surrounded by glass windows on all sides. 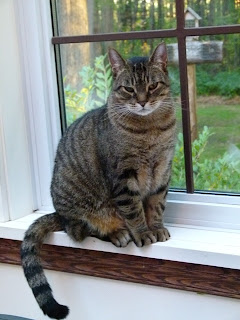 This is the handsome Caruso. I did see Macy but she is shy and I was unable to capture her photo. 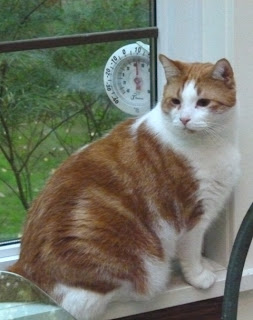 Members of the Norfolk Twilight Guild worked hard and made further progress on their collage trees than any class I've taught before. Here are some of the students in the class showing off their trees. When finished, the extra muslin needs to be cut away and the tree appliqued to a background. 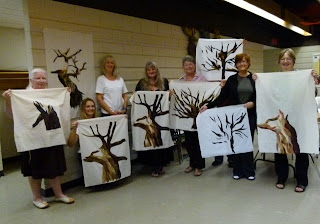 As usual, there are too many photos of student work to share here, but I did want to draw attention to this lovely piece that Stella made in the "Fast and Fun Fused Designs" class. 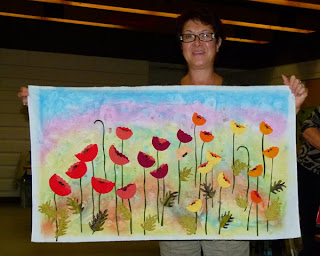 It is good to be home again. It took me most of today to unpack and put things away. I have deadlines waiting: class descriptions, learning outcomes and marking schemes for next summer's classes at the Haliburton School of the Arts, and preparations for Saturday's Art Quilt class. It is also time to do the research for and purchase a digital projector so I will be prepared for trunk shows I need to fly to.
Posted by Elaine Quehl at 6:08 PM

Email ThisBlogThis!Share to TwitterShare to FacebookShare to Pinterest
Labels: TeachingTrips