When I heard that the village of Civita di Bagnoregio was accessible by suspension bridge (on foot) only, I was leery.  Did I want to be walking across a bridge that was swinging freely?  Not really! But when we arrived, I saw that there were stationary posts holding the bridge up, and I saw a charming and fairy-tale like village on the other side of the bridge, and knew I had to get there!! 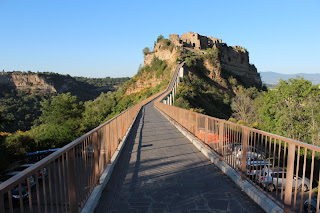 I found this village so facinating that I purchased a book about it and its history from a small shop in the village.  A good thing I didn't read it until I was on the plane home because I learned that the bridge has fallen down several times over the years, and that this region of Lazio has been plagued by earthquakes numerous times!  The terrain in this area is precarious because of clay in the valley, and two streams that often wash away and erode the clay.  It is believed that an Etruscan city stood here in the 8th century BC, but the current structures date to the medieval period.  Little of the original village remains due to landslides that result from seismic activity.  There is now a conservation project underway to research ways to preserve the village. 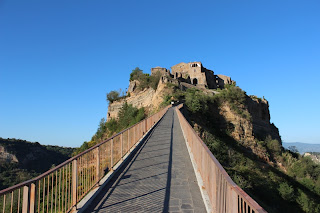 You can see below how steep the ascent was.  I'm the lone figure near the bottom hobbling with my cane.  The truth is that the way up was a lot easier than coming down.  Climbing involves the quad muscles, but the decsent really hurt my knee-caps, and it was a long slow climb back.  A couple of people have written to ask how my knees fared on the trip.  Thankfully there was no swelling or inflammation as a result of increased activity on steep streets. I did take one ankle weight with me and used it every 2-3 days, and was also careful to stretch every day.  I used a cane at all times as terrain was uneven, and the streets cobbled. I've tossed the cane since coming home. The photo below was taken by my husband with a different camera and explains why the sky is a different blue in this photo, but yes the sky was really as blue as it appears.  Our last week was filled with perfect weather. 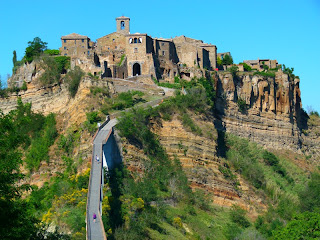 The final ascent to the top really works the heart muscles. 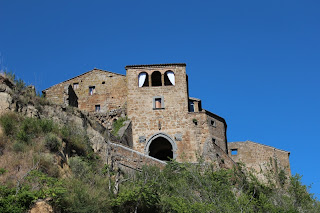 Once you step through the arch, you are inside this beautiful square. 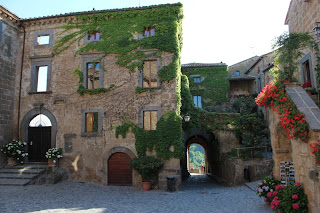 This is the view on the other side of the square. 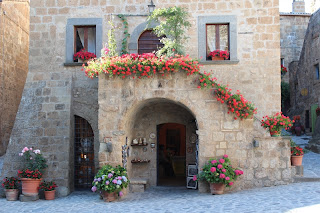 There are differing reports on how many residents live in the village, but all of the numbers I've seen are lower than 100.  I got the impression that this was now a hip place to purchase a property, but what a risk when parts of the village slide down the hill regularly?  We found the buildings in the village beautifully preserved and decorated liberally with potted flowers.  Check out these beautiful hydrangea. 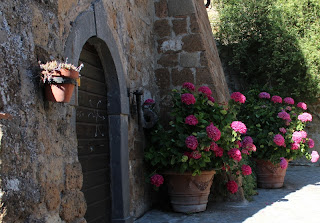 To give you a sense of how big the plants are, I am posing next to them in this photo. 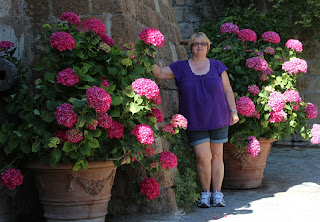 Around every corner was another WOW moment.  Isn't this a beautiful garden gate? 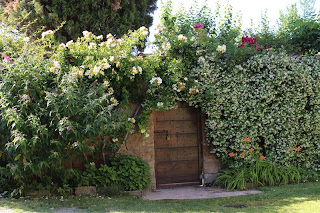 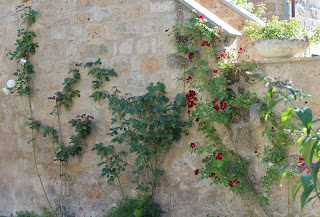 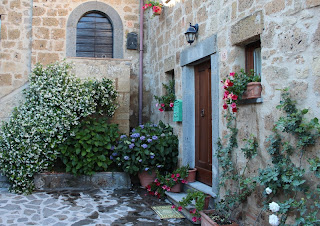 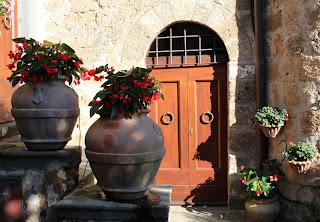 I think this photo of the climb back to the parking lot gives a better idea of how high and steep the walkway is.  Along the sides, you can see Yellow Broomflowers. 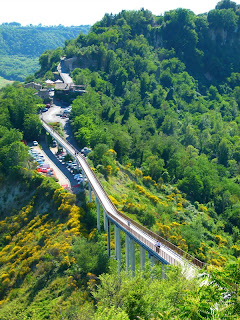 Once you've made it back down the hill, this beautiful bench awaits you if you need a rest.