Remember the collage trees I have made in the past? Like this one, named "Branching Out"? I really think my new Brother ScanNCut machine would be great for cutting the bark pieces I use to collage the trunk and branches. 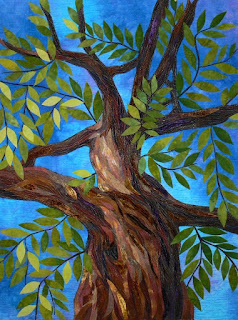 The fern project I made a few weeks ago went smoothly because I used the old Steam a Seam Lite fusible web (the one with only one backing paper). It had just the right stickiness (not that much) for the Standard Mat. This fusible was discontinued, so I've been experimenting with Steam a Seam Lite 2 (two backing papers). It turns out that this fusible is far too sticky to use with the Standard Cutting mat. It actually left a layer of fusible web across the entire mat that I had to scrub really hard to get off.

It then occurred to me that cutting with the Low Tack Mat (instead of the Standard Mat) might be a good idea. I was right, that worked just fine. I repeated the experiment today, and yes I have concluded with certainty that the Low Tack Mat is the one to use with Steam a Seam Lite 2 fusible web. You can see here how well it cut. 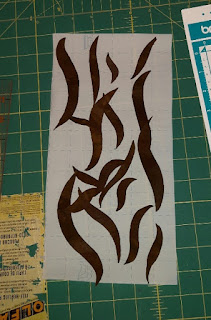 One thing I have finally learned is to run a test cut before committing to cutting an entire sheet of shapes. That way if you get the settings wrong, or you choose a mat with more or less tack than you need, you will only gum up or slice through part of your mat. So today I drew only one piece of bark and scanned it in. 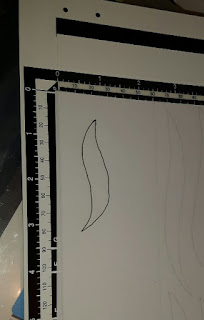 I still have a fair bit of Pellon Lite EZ Steam from two years ago when Steam a Seam products were unavailable. The Pellon product is way too sticky for the Standard mat too, and it did not work very well with the Low Tack mat either. So I have concluded I will not be using the rest of this fusible web as I do not like it for this, or any other purpose.. 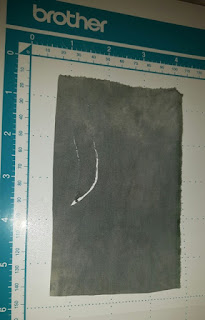 I also noticed when cutting bark that some of my shapes weren't fully cut out, or had wiggly edges. That would be because in my original drawing that I scanned (below), I did not close in all my shapes with my marker, and some areas almost had a double line where two lines met. I redid my drawing today and re-scanned it. 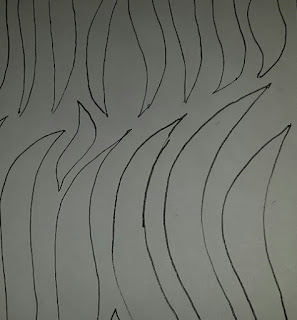 I also tried a few other fusibles today. Because it doesn't have that sticky re-positionable adhesive like Steam a Seam products, Wonder Under works well with the Standard Mat. 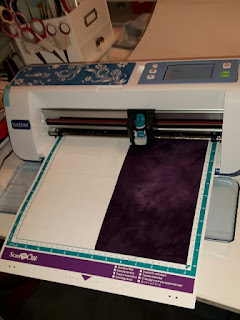 I cut a beautiful sheet of bark using Wonder Under fused fabric and the Standard Mat. 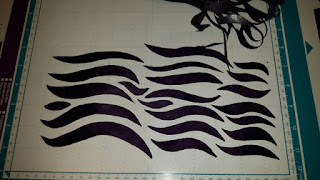 Here are the pieces after I pulled them off the mat and laid them on the release paper for storage. 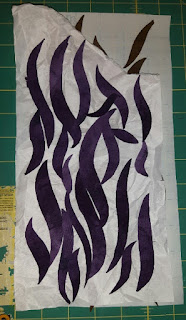 I also tested TransWeb with the Standard Mat. It did not seem to stick to the mat enough, so you can see that the pieces were lifting off the mat while they were being cut, and this did not result in a clean cut. I won't be using this fusible with the ScanNCut either. 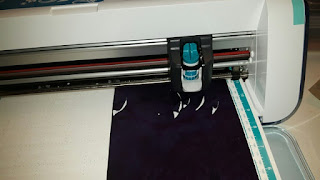 I gave another try at cutting bark with the Low Tack Mat and Steam a Seam Lite 2. It worked beautifully, and for this I am thankful, as it is my fusible of choice. I need the pressure-sensitive, re-positionable adhesive for the works I make that are comprised of a lot of little shapes. The design sticks together while you are building it. The ScanNCut can cut these shapes faster than I can. You will notice that I made sure to create a variety of sizes and shapes because I want this to look natural. 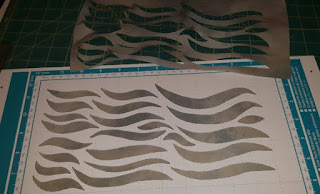 Despite a good cut, you will need to keep your mat clean. There will always be little bits of fabric and sometimes a smidgen of fusible, left behind. I read on-line about using baby wipes to clean the mat. I tried them, and they do work well. 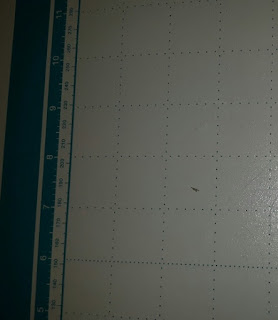 I opted for the unscented ones because I just don't want a lot of perfume circulating in the air in my small studio. 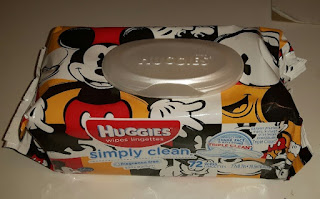 I am now through a lot of the experimentation with fusibles and mats, and am ready to tackle another project and confident the Brother ScanNCut can handle my preferred fusible, Steam a Seam Lite 2. Oh, and by the way, there is also a "Mid Tack Mat". I haven't needed that one yet.