Great to see the sun on a Monday morning after a stormy Sunday! Along with getting hosta patterns folded, and revising all my tree patterns for classes in South Carolina, I finally ironed and cut about 30 meters of mostly green fabrics that I dyed late last year. This gave me a couple more possible backgrounds to audition my fern leaves on. 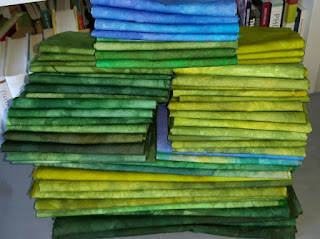 Now I present all 13 options I considered. I'll tell you what I think, and then you can vote if you'd like. 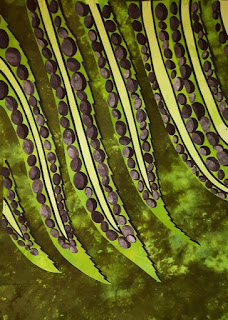 One: I don't mind this one as the ferns pick up a similar green in the darker background and make it all look part of a forest scene. But it doesn't make my heart sing. 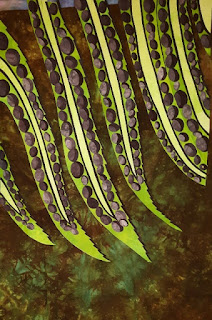 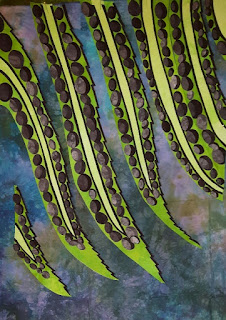 Three: Not really. Was thinking the hint of a complement of purple might set them off. It does but looks like the ferns don't belong there. 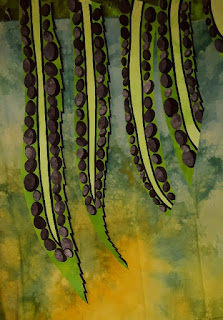 Four: A little light shining through the forest. Makes the ferns disappear. Can you tell I was getting tired of pinning, unpinning, and repinning the ferns again and again on different backgrounds in order to take a photo? 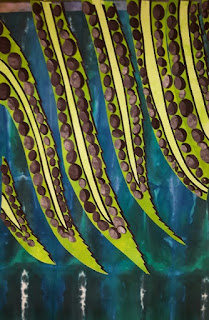 Five: This is a piece of fabric dyed while folded, so it has bars of blues running vertically. The white spots look like light on a lake at night. I could paint them, but no this doesn't do it for me either. 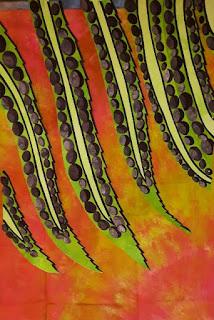 Six: A splash of pink, orange and yellow. Nope. 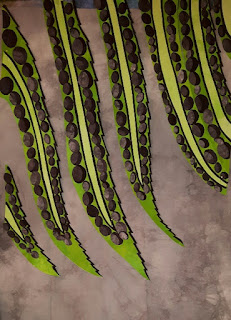 Seven: In keeping with the same greys in the circles on the fern fronds, I tried a background of grey. Dead and drab. Nope. 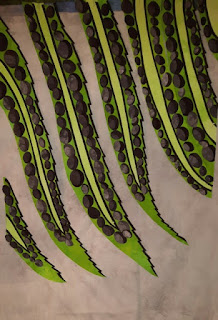 Eight: How about a lighter value of grey? Nope, still dead and drab. 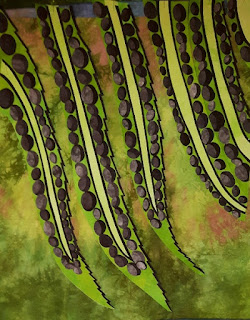 Nine: Thinking a little hint of  pink in the green might make them pop. Not crazy about this one either. 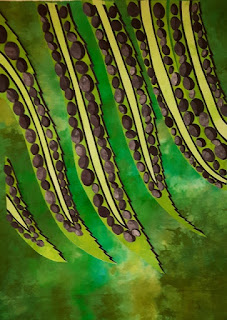 Eleven: A brighter green. No. 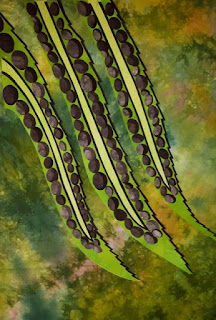 Twelve: Green with a little blue and soft red-purple thrown in. Not there yet. The background seems too busy. 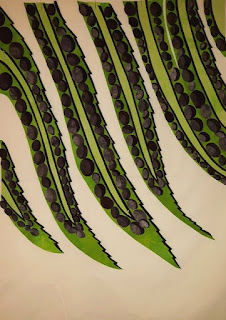 Thirteen: Which brings me back to a white background. This photo doesn't look as crisp and white as in real life. I am not in love with it, but it is still my preference. Thinking I might rev it up with interesting machine quilting, face the edge, and mount inside a modern black float frame. So that's the plan now.

Feel free to weigh in with your choice and let me know why.