A Bird in Hand

On the first sunny day in Yellowknife, we drove out the Ingraham Trail and hiked out to Cameron Falls.  We are talking on the edge of wilderness here, so I carried my bear bell!  With my bad knees, the climb up and down Canadian Shield was extremely difficult, but well worth it!  On the way to the Falls my husband shared a bit of his granola bar with a very friendly "Whiskey Jack" (also known by the name "Grey Jay").  Eventually he decided to up the ante and offered more granola bar from his open hand.  The bird took the bait, we had an amazing experience and I managed to catch a couple of photos.  This is one of those special experiences one is not soon to forget!
﻿ 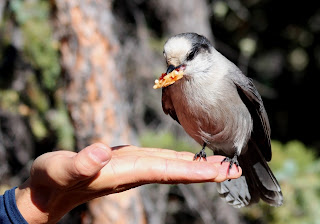 At the end of the trail we came to the spectacular falls.  Unfortunately I had only brought my zoom lens with me, which resulted in a great photo of Whiskey Jack, but prevented me from getting a nice wide-angle shot of the Falls.  The area depicted below, just left of the Falls, reminds me of a scene I've seen in a movie (A River Runs Through it??).  I sat on the bench for a while. 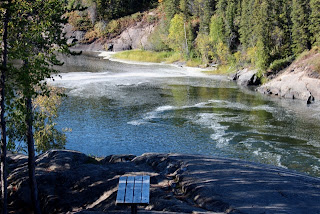 I captured a bit of the falls 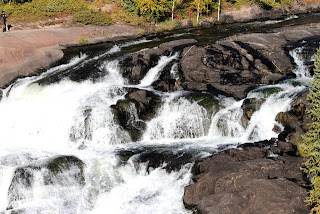 as it rushed by behind this tree. 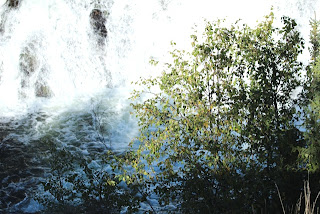 The changing leaves added to a beautiful experience. 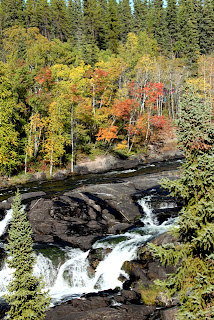 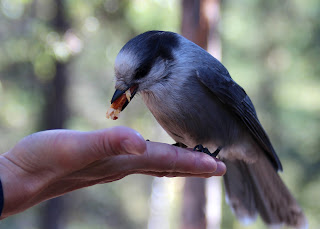