One of the most memorable days of our trip to the Northwest Territories was the day we travelled with our Dene guide, Joe, from North Star Adventures for a wood bison viewing tour.  The Mackenzie Bison Sanctuary runs along the Mackenzie Highway from about an hour south of Yellowknife all the way to Fort Providence (about 200 km).  That's my husband you see pointing to the sign warning of bison. He is entertaining thoughts of writing "No Bull" on this photo and hanging it on his office door at work.  ﻿ 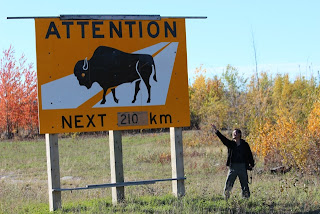 The bison are HUGE, some weigh more than 2,000 lbs, so you do not want to run into one with your vehicle.  They do spend a fair bit of time on the highway stopping traffic.  They didn't seem particularly bothered by our vehicle, but they did switch back and forth between the left and right sides of the road several times while we watched them for at least an hour. 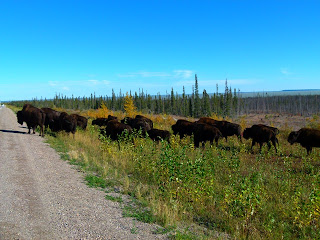 This one is a massive male, probably a few years old. 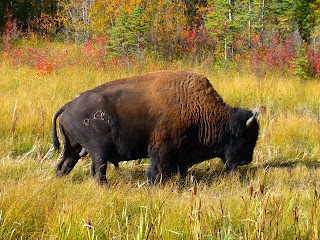 Their heads alone may weigh as much as you or I! 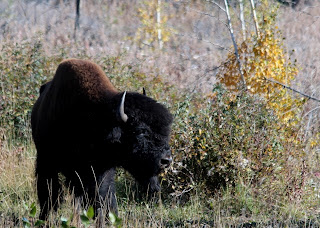 Check out this bison, lying on a carpet of mud/dirt.  My husband actually filmed a brief video of several bison taking turns having a mud bath.  Each walked up, kicked up a bit of dirt with a front hoof, and then proceeded to roll in the mud.  It looked like they felt pretty groovy doing it too.  I've posted this video, along with another of two bison sparring, on my Facebook page.  If you are friends with me there you can access these videos on my FB page.﻿ 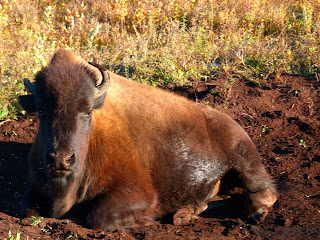 You can see in this photo that the bison are constantly plagued by a swarm of small flies.  My husband was also being bothered by flies, which were particularly plentiful in Fort Providence.  When I am with him I don't need to worry about flies or insects because they find him to be the juicier morsel and generally leave me alone.﻿ 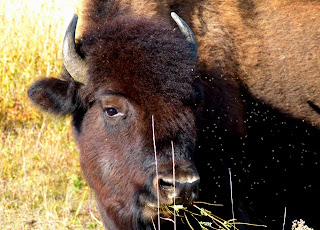 There were lots of beautiful views along the way. 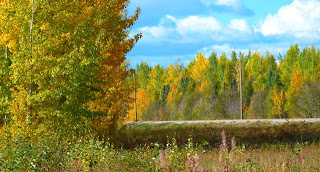 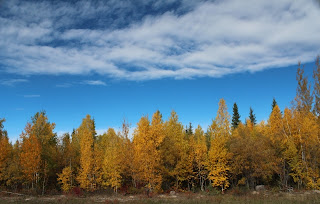 A very special thing happened to us on this tour.  While having lunch at a restaurant in Benchoko, one of the most important first-nations towns in the Northwest Territories, we met Grand Chief Edward Erasmus of the Tlicho Government, who invited us back to his office.  Chief Erasmus presides over the Behchokǫ̀, Gamètì, Whatì, Wekweètì tribes.  He has been instrumental in negotiating land-claim agreements with the Government of Canada.  In fact, he gifted my husband with a copy of the land-claim agreement for a major portion of land owned by first nations communities in the Northwest Territories.  We all got our photos taken with him.  Here's mine! 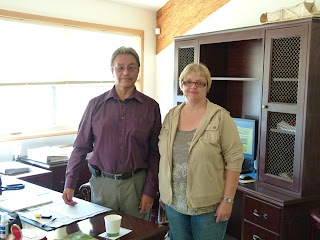 We were all gifted with a cap with the group's logo on it.  Here we are wearing them.  That's my friend Donna from Yellowknife on the left of me, and Joe, our guide on the right. 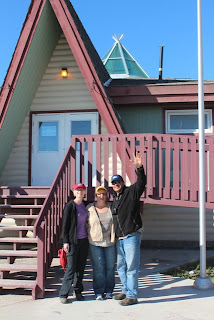 On our way out, we met this adorable boy, whose father encouraged him to pose for a picture. 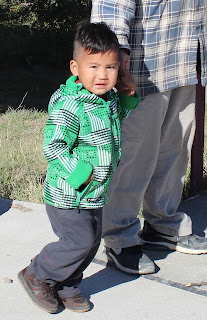