On most nights, excerpt those that it either rained or was cloudy, we drove to Prosperous Lake, about 20 kilometers outside of Yellowknife to look for the aurora borealis.  This takes you far away enough from the light pollution of the city of Yellowknife (population about 21,000), where you can see the drama of the aurora borealis at its best.  We saw aurora a total of four nights, two of which were quite spectacular.  We took probably hundreds of photos.  Since we are new to night-time photography, many of them are not that great.  Below I share our best.﻿ 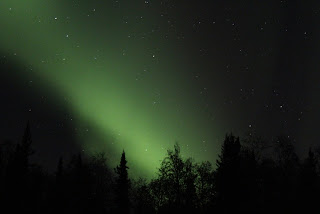 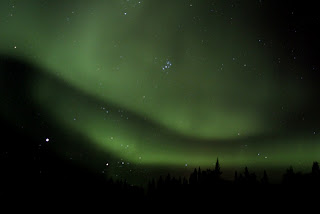 The wonderful thing about photographing aurora in September is that you get wonderful reflections off water if you photograph near a lake.  ﻿ 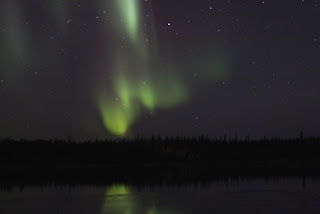 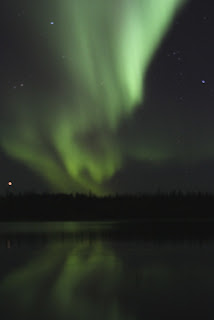 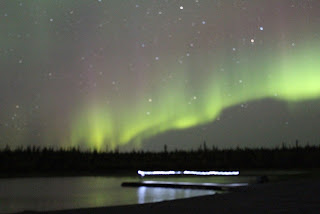 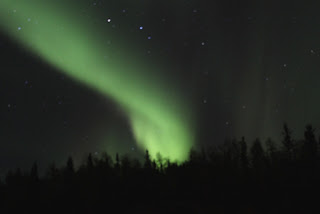 One night we even had a spectacular show that was visible from the balcony of our tenth floor apartment.  This apartment also afforded a wonderful view of Great Slave Lake, even on days when the weather was less than optimal.﻿ 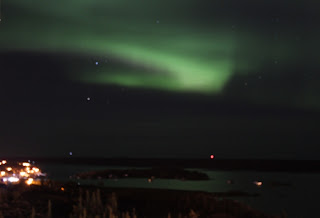 Why is the Yellowknife area one of the best places in the world to view aurora?  Because it is located directly beneath an aurora oval.  The aurora oval is a halo-like band located around both magnetic poles of the earth. The cities located under the northern oval include Yellowknife, Canada; Fairbanks, Alaska and Lapland, Norway.  Yellowknife has the least geographical obstructions, such as mountains, to provide a high percentage of clear weather that results in a high viewing probability.
The stars were pretty spectacular too!
Posted by Elaine Quehl at 9:28 PM